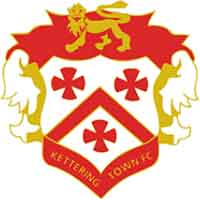 A tough nut to crack at the best of times, Kettering Town became a regular opponent during our time in the Conference. The Poppies’ fortunes took a slide as we left the old century behind, however. Of course, relegation in 2001 didn’t stop ’em coming back to haunt us during the next season’s FA Cup campaign. After one season back in the non-league big time in 2002-3, they went down again and didn’t come back ’til 2008.

By that point, of course, they’d gone down the route of naming a 1990s Spurs legend as manager. Who’d do that, eh? Anyway, we came up against Gazza’s Kettering side in the 2005-6 FA Cup; an encounter we won 3-1. It certainly piqued the interest of the media in any case. We wouldn’t know about that sort of thing…

Since our promotion to the Football League, things got tough for the Poppies. No longer do they play at Rockingham Road. And the club slipped further down into the Southern League after going into administration. The path back to the Conference became even longer. But they at least made it back to National League North for the 2019-20 season.

Kettering now play their home games in Burton Latimer. To get here, head north on the A1 and then go west on the A14. At Junction 10, come off for the A6. Take the second exit for Kettering Road, quickly followed by the second exit at the next roundabout onto Altendiez Way. This is again quickly followed by yet another roundabout, which you’ll need the third exit. The ground is on the left after just under a mile.

At the ground, there’s a limited number of spaces for fans. With restrictions on local on-street parking too, your best bet is to arrive at the ground in plenty of time. It’s likely that Boro’ will take a few to this one – and a few locals will also turn out too.

Kettering’s station is a fair old distance from where you need to be. You’ll either need a bus or a taxi to complete the journey.