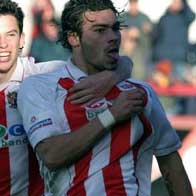 Much about Anthony Elding goes without saying, but we’ll say it anyway; another striker to take Boro’ by storm after joining from Boston United in 2003. Carl Alford and Barry Hayles had long gone, but the young Eldinho was quick to make his mark. And it was in the 2005-6 campaign that he closed in on 100 starts for us; completing a half century of goals in the process. It’s a remarkable return by any standards.

For two straight seasons, Elding topped our scoring chart; more than 20 against his name in the 2004-5 march to the Conference playoff final. Sadly, however, the following season was less about his skills on the pitch. Instead, his off-field relationship with gaffer Graham Westley came square into focus. The boss didn’t want to let him go play for England C, so a chain of events started that saw Elding leave us under a cloud. If that was unfortunate, his move down the ladder was surprising.

Kettering Town stumped up £40,000 for his services, but it wasn’t long before Elding was on the move up to the Football League. Stockport County, Leeds United and Crewe were among the sides to sign him, while there have also been spells in Turkey and Ireland.