What is BoroGuide to Stevenage FC?

Easy question, innit? What is BoroGuide? Quel est BoroGuide? Was ist BoroGuide? Well, much like Facebook started life as ‘The Facebook’, so did we. Instead of forcing “The Boro’ Guide” on you all, however, we trumped the boy Zuckerberg and went straight for the snappier name. We are the leading independent Stevenage FC website; the eagle-eyed among you will have seen that on our homepage and extensive range of literature.

We’re here to give you all the Boro’ information that you could want; from who that lad is out on the wing there and where you park your motor at Gillingham, to all the historical nitty-gritty. If you want to know what Boro’s biggest win ever is or where we’ve finished over the years, we’ll tell you. We can’t say when Dean Martin is coming back, though…

To be useful. That’s more or less it. We don’t want to give you the news or report on every match. There’s enough people out there getting paid to do that, without us piling in, adding to your reading list and (more importantly) getting three-quarters of sod all in return. OK, your gratitude does make it worthwhile. In all seriousness, however, we’re all about the features and the profiles and the details that you can dip in and out of whenever you like.

We are totally and completely independent of Stevenage Football Club and, indeed, its various employees. The views here do not represent the club or its officials in any capacity. Unless stated, all written content is original and ours. If you want to use anything, just ask – we’re really nice.

Despite the best efforts of our editorial team, BoroGuide hasn’t been able to take all its own images. Many of the photos you see have, admittedly, not been taken by us. We do not claim ownership and use the images under fair use. We look to give full credit – let us know if we’ve failed in that task.

BoroGuide was originally born out of frustration in the pre-season of 2002. When we say frustration, what we mean is that there was no real alternative Stevenage FC website to rival the Official Site. We hope we have a formula that will succeed where others haven’t in the past. It’s not by doing anything elaborate or spectacular, but by simply providing the information and features that you want. So, how good we are is down to you. 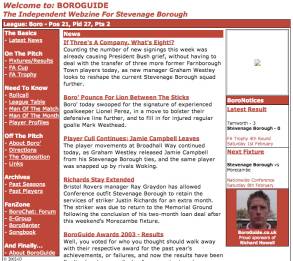 The First Edition: In our early years, the ‘independent webzine’ for Stevenage FC wasn’t the prettiest website on the block and we were still bandying around Web 1.0 terms such as “webzine” – but at least we didn’t take half a day to load on a 56.6kbps dial-up connection.

A partnership between two editors came about from a frenzied email exchange, and here we are now. We’ve seen managers come and go; far more players come in and out too. But we’re still here; just like a dog gives unconditional love to his master, or a supporter to his/her team.

In summer 2006, both editors had increasing time restrictions and meant we put an end to our news and match report service. This was due to the realisation that falling behind with matches and latest developments is decidely poor form. So, we now focus on providing a more comprehensive version of existing features. And, by doing this, we hope to help you know more about Stevenage FC. Or at least enough to help you win a few pub arguments.

The site is run by the smallest of editorial teams, but we have our thanks to make: Ken Jude, Stuart Govier, Dave Toyn, Paul Lyme, Mark Edwards, Gregor Bowie, Colm Britton, Steve Watkins, Danielle Machin, Kevin Coleman, Matt Ranson, J Shenton (The Comet), James Cannon, Dave Paul, Chris Day, David Richardson, Matthew Clark, Alan Ford, Lloyd Briscoe and Russell Whiskin. That is in no particular order and thanks is due to all in equal measure.

Websites have also helped us in our research, such as: Football Club History Database, Non League Matters, Russell Gerrard and the RSSSF’s Non-League Archive.

We will look to keep on going for as long as you want us. Or unless something pretty drastic happens at our end. We’re enjoying our work, however, and enjoying the ride that Stevenage FC has taken us on in recent seasons; up the leagues and through the cups.

Long may it continue, don’t you think?