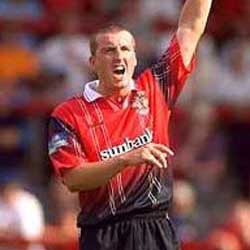 To look at Carl Alford, you would probably be forgiven for thinking that the striker wasn’t really the most agile nor the most nimble of players; plying his trade at the top of the non-league tree with clubs such as Yeovil Town, Stevenage Borough and Rushden & Diamonds.

While you would have been forgiven, you’d have been so wrong that even Jeremy Paxman couldn’t patronise you enough. The bottom line is that Alford was a prolific marksman; up there with some of the best the Conference has perhaps ever seen. An immensely powerful striker with a cute eye for goal, it was no wonder top non-league clubs were after him.

His record at Broadhall Way speaks for itself. With a deadly eye for goal, Alford ranks as one of Boro’s sharpest shooters. With nearly 60 goals in 95 total appearances, it is a return that more than filled a gap left by Barry Hayles. Not even Alford’s goals, however, could return us to the top of the Conference table.

It was a habitual ability to score goals, goals and more goals that came back to haunt Boro’ a couple of seasons after he left. In the FA Trophy, Alford more than helped sink Wayne Turner’s efforts to write himself into our folklore at Villa Park. And he did it with an awkward overhead kick.

In a way, it was quite beautiful in its execution. And yet, as someone sat behind the BoroGuide team that day said in rather ungracious terms, “Alford, you fat f**k”… – it’s funny how football fans can have such short memories and betray the remarkable scoring record he displayed at Boro’.

To see Carl in action in a Boro’ shirt, visit www.carlalford.co.uk