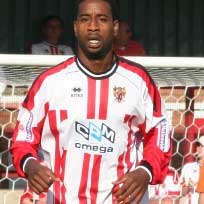 Dwane Lee was the last addition made to the squad before the transfer window shut at the end of August 2006, arriving on a free transfer. Before coming to us, he’d been a big part of Barnet’s 2004-5 Conference-winning campaign. But his career with the Bees came to an end after a training ground incident; one that saw him move to Kidderminster and then onto us. He left after making a handful of appearances, apparently surplus to gaffer Mark Stimson‘s needs.