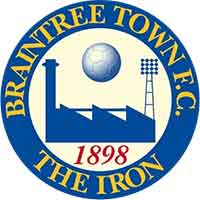 It feels strange to us that we’ve not played all that many competitive matches against the Iron. Rolling around into summer 2020, you had to go back nearly quarter of a century for our most recent meeting against Braintree Town; a 3-1 victory in the 1996-7 FA Cup Third Qualifying Round. We did meet in a summer 2020 friendly, however. It was played behind closed doors due the coronavirus thing. We best not have a repeat of our 1985-6 Eastern Floodlit League Semi-Final Second Leg then.

Head out of Stevenage on the A602 to Ware, switching to the A10 north and then A120 east at Standon. Continue on the A120 through to Stansted Airport and on further past Great Dunmow. Eventually, you’ll reach the edge of Braintree.

Once you come to a roundabout with McDonald’s and the Freeport retail park, take the first exit for Cressing Road. Turn left after 0.7 miles for the stadium.

The club’s own car park is modest in size and costs a couple of quid. Otherwise, make use of street parking.

This becomes Lakes Road and, where it kinks on the left, go down here onto Chapel Hill; latterly Cressing Road. Follow the road around to the right and the ground itself will be on the right shortly after.