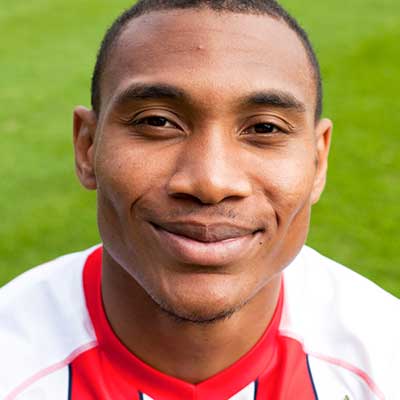 Having been a long-time admirer, boss Graham Westley wasted no time in signing Darius Charles ahead of our first season in the Football League. For an undisclosed fee, we got our man and Ebbsfleet United were placated during the 2010 close season. Naturally a defender, the player found himself converted into a forward at Boro’; chipping in with four goals. He also surprised some with a deft touch and pragmatic approach when up front.

One of his better performances came in he npower League Two playoff final. With a goal not forthcoming in that game, Charles’ role in our attack play played its part. We ended up running out 1-0 winners; thanks in no small part to his versatility. After five years with us, however, it was time to say goodbye. The player moved north to Burton Albion, signing for the newly-promoted League One side on a one-year deal.

Charles started his football career as a youth player at Brentford in 2004; breaking into the first team as an 18-year-old in 2005. After failing to impress at Griffin Park, however, he went on loan to Thurrock in 2006. It’d take him spells at four other clubs before he found his feet at Ebbsfleet United. The move to Fleet became permanent in 2009; establishing himself as a fans’ favourite. With 55 impressive appearances, he earned two call ups to the England C team too