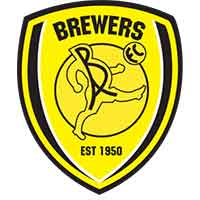 A club we first met back in 1984, Burton Albion became quite a familiar sight in both the Conference and the Football League; the Brewers are old friends in many ways. That first chance meeting was an FA Cup clash indoors, and one we’d lose comfortably in the end. After that and an FA Trophy tie in the mid-1990s, it wasn’t until Burton were promoted to the Conference themselves in 2002 that our meetings became more regular.

While we beat them to the Conference, the Brewers beat us to the Football League; just by a single season, but it still counts (and hurts). Our jostling continued after that too; us getting into League One before them. We were, however, completely outdone after the Brewers’ promotion to the Championship in 2016. It’s now up to us to match it. And outdo them once again too; promotion to the Premier League anyone? You wouldn’t say no.

The Brewers are also an odd one in that we have bad memories of them. But, actually, we’ve done pretty well against them; winning 10 of our 21 meetings as of summer 2020. Who knows what comes next when we finally do get a chance to renew acquaintances.

For away fans with an impairment or disability, the Brewers aim to make sure your visit is an enjoyable one. First, the parking situation. There are a limited number of spaces for away fans in the car park. You can book these in advance by calling 01283 565938. It’ll cost you £5 and you’ll pay when you get there.

By booking ahead, it guarantees you a space. But there could still be a walk to the away fans’ entrance. You can also inform the club when you book that a wheelchair space will be needed. Otherwise, you may get a ‘regular’ space.

In the East Terrace Stand, there are a number of wheelchair bays for travelling fans. For those fans who use a wheelchair or have an ambulant disability, a personal assistant can come with you for free if you receive the higher Disability Living Allowance rate. Proof of this entitlement will be needed when booking your tickets, which should be available from Boro’.

For fans with ambulant disabilities, the Brewers recommend getting a ticket in the seated stand in Row A. This is because there are no steps. And if you need further assistance, a side gate provides easy and accessible entry next to the turnstiles.

You won’t have to stray too far from the Pirelli Stadium to find yourself somewhere that’ll serve you a pre-match pint. The Beech Inn is just 10 minutes’ walk up the A5121 Derby Road as you head away from the centre of Burton. An alternative is the Great Northern, which is on Wetmore Road; one of the roads that leads off from the roundabout outside the stadium and on the other side of the railway bridge.

Or, for a micropub that sells real ales and ciders, you can try the Last Heretic. It isn’t too far from the station, has a large beer garden and opens early enough. Oh, away fans are welcome. That’s why we mention it.

There are two ways of getting to Burton itself. And it’s really down to the flick of a coin as to which you prefer. You can exit the M1 at J22 and trek across the midlands past Ashby-de-la-Zouch on the A511. Or you can continue up to J24 and go across the quicker – but longer – A50 route; turning off southbound at the A38.

Take the A511 for around 17 miles; passing Coalville and travelling through Ashby-De-La-Zouch, Woodville and Midway. This area is dotted with speed cameras, so beware! When you enter Burton, get into the right hand lane at the bottom of Ashby Road (A511); going over the traffic lights and across the Trent Bridge.

Staying in the right hand lane, go straight on through both sets of lights at the end of the Bridge into Horninglow Street. Head straight on again at the next lights, then turn right at the traffic lights underneath the Brewery fly-over into Hawkins Lane. Go through the industrial estate, straight across the mini-roundabout and over the Railway Bridge.

As you go over this, the floodlights are visible. Once over the Railway Bridge, you’ll come to a roundabout. Go straight across into Princess Way and the ground is on the left.

You can park at the stadium if you arrive in time. There are 400 spaces and it’ll cost you £5 for the pleasure. One other option is to park at the Ryknild Industrial Estate; again at a cost of £5. This can be reached from Derby Road Island by taking the first exit. You’ll see it signposted on matchdays too.

The station is about 0.5 miles to the west of the town centre on Borough Road. The walk is roughly 25 minutes. Leaving the station, turn left and then take the next right into Derby Street. Keep going down Derby Street for about 1.5 miles; continuing straight across the first roundabout by the Derby Turn pub.

Turn left immediately at the next roundabout into Princess Way. The way into the ground will be 300 yards on your right.