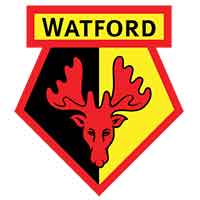 Watford are the team to beat in Hertfordshire. But we only did it once to date. It’ll happen again one day soon, however. For us, it does look like it means breaking into the top two divisions first. That’s something we’ve not done either. So, perhaps one will lead to the other and we can take the mantle of Herts’ best team from the Hornets?

There’s always the chance they’ll have a massive fall from grace too. But we wouldn’t bet on it. Even if the 2019-20 season did end in relegation from the Premier League.

Take the A1(M) south and leave it after coming out the other side of the Hatfield Tunnel. Take the A414 towards St Albans and – at the Park Street roundabout – use the second exit for the A405 towards the M25. Continue over the M25 and then take the M1 south.

Exit the M1 soon after at Junction 5 and head into Watford on the A4008. You’ll go over one roundabout. But, at the second in front of a Premier Inn, take the second exit for the A411 Beechen Grove.

Follow the one-way system around to the left, before bearing off left after nearly half-a-mile. This is Vicarage Road. There’s a natty left/right/left combo to negotiate before you reach the stadium.

No parking is available at the ground and street parking is also off the table due to local resident schemes. Don’t think about trying Watford General Hospital either. Instead, try one of the many options in the town centre; the easiest of which is Church Car Park. It’s inside the ring road opposite the turn for Vicarage Road.

Leave the station on Lower High Street, turning left and left again onto Exchange Road. Follow this around to Vicarage Road and turn left, heading more or less in a straight line.