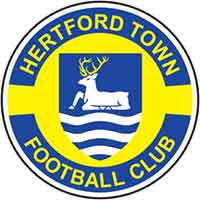 Hertford Town are yet another close neighbour of ours – and we’ll always thank The Blues for letting us have Paul Fairclough; the 1990 appointment of Cloughie hugely transforming our fortunes. After 10 years in the Spartan South Midlands League, the Blues moved back to the Isthmian League in 2017; a competition we played ’em most often in during the 80s.

Leave Stevenage on the A602 towards Ware. After following the Watton-at-Stone bypass, take the second exit at the roundabout for the A119 towards Hertford. Continue on into the town; passing under the railway at Hertford North and continuing towards the centre.

You’ll need to come back on yourself here. That’s because you want to turn left for West Street just after the garage. As West Street bends around to the left, the entrance to the ground forks off to the right.

The ground has space for 100 vehicles – and that should be more than enough.

Turn right out of the station and head along North Road past the hospital. Go straight on as you get to a mini-roundabout that leads off to the A414; staying on North Road. After you pass some new flats on the site of an old garage, there will be a subway to take you onto the far side of the dual carriageway.

Walk against the traffic (more or less in the same direction) and turn right for West Street.