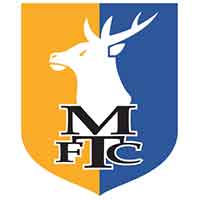 It took 12 games between us and Mansfield Town until we produced a draw; a sign that one of us normally comes out on top. Our first meeting came during the 2008-9 Blue Square Premier campaign; The Stags coming down from League Two. Four years after we went up, it was the Nottinghamshire club’s turn; returning to the Football League and picking back up where the left off with us.

The Stags claim to offer exceptional facilities for fans with a disability or impairment.

Carers are admitted free of charge if you have proof of entitlement to the higher rate of Disability Living Allowance or enhanced rate of Personal Independence Payment. For fans with a visual impariment, carers go free with a copy of registration documents that certify Registered Blind status.

In the North Stand, there are 28 spaces for wheelchair users and these are located on a raised platform. For more information, the advice from the club is to ring their ticket office on 01623 482482. You can also email the club’s disability liaison officer or visit the official club website.

Past trips to Mansfield have seen some away fans gather at The Talbot on Nottingham Road, up past Il Rosso and opposite a huge Sainsbury’s. You can always chance your arm at the Sandy Pate – a bar under the Ian Greaves Stand. Otherwise, the town isn’t that far away if you want to head further afield for your pre-match pint.

From Stevenage, travel north on the A1(M) and A1 for Mansfield. And you pretty much don’t need to do anything until you reach the A46 exit for Sleaford/Lincoln/Newark (A17). That’s about 95 miles down the track.

It’ll be about a mile until you reach a turning for Berry Hill Lane. Turn down here, and continue over two roundabouts close together. Shortly after, make a right onto the A60. Just after you pass a Currys PC World in 0.6 miles, take a left – at which point the stadium should be visible.

There’s a small car park at the ground that operates on a first-come, first-served basis. It’ll cost £5 per car and the advice is to get there as soon as you can. You might wish to see if you can find some local street parking or use local Pay and Display car parks.

Don’t park in the neighbouring retail park, however. You could get a ticket.

The station is not too far away from the ground. When you leave the station, head towards a retail park at the other side of the A6009 and you’ll be able to see the ground. Turn left down the A6009 dual carriageway, crossing wherever possible and continuing straight along Portland Street until you reach Quarry Lane. The walk should take 10 minutes to get from station to ground.