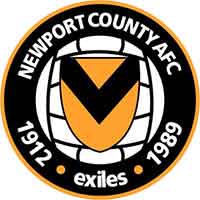 After relegation from the Football League in 1988, Newport County went out of business – but have since come back with a bang. Promotion to the Conference came the same year that we won the title; three years later, the Exiles were ‘back’ in the League.

Here’s a fun fact while you’re here too. By virtue of winning the 1980 Welsh Cup, Newport took part in the 1980-1 UEFA Cup Winners’ Cup… and reached the quarter finals!

Disabled visitors to Newport County need to produce confirmation of the Disability Living Allowance in order for personal assistants to enter for free, while the admission price for the individual is the full rate. Where travelling fans are housed in the Bisley Stand, you’ll find six wheelchair bays at pitchside if needed.

For travelling supporters, you’ll have to contact the club in advance on 01633 670690 if you wish to make use of one of the 55 parking spaces at Rodney Parade.

If you don’t fancy the Rodney Parade clubhouse, you have a couple of options. You can head east on Chepstow Road (that’s towards England) as there is a Wetherspoons called The Godfrey Morgan down there. Otherwise, head west and back across the bridge into the centre of Newport. It’s an experience, but there are three more Wetherspoons to be found, for example…

If you’re driving across the border, the motorway is the quickest way to do it. Probably. Go south on the A1(M) and take the counter-clockwise M25 around to the M4, before heading out west. It’s around 130 miles that you’ll be sticking with the M4 for; although that’s if you opt to take the Second Severn Crossing.

You can, of course, take the original crossing if you’re feeling nostalgic.

At Junction 24, exit the motorway; the Newport East/A48/A449 exit if you were asking for more detail. Take the second exit at the roundabout for The Coldra/B4237 and plunge into the outskirts of Newport. From here, it’s pretty simple; continue on the B4237 right into the city, before turning left after around three miles – and before the river – for Rodney Road.

Don’t be surprised to find no parking at the stadium itself; it’s located within a residential area and spaces are set aside for locals. That said, you may get lucky if you turn up with time on your side in streets where the scheme isn’t enforced.

The alternative, of course, is to use city centre car parks; one is located on the other side of the road to the railway station, for example.

The move from the Newport International Station to Rodney Parade has made it easier to make the journey from the train station by foot. Leave the main entrance of the station (on the south side) and turn left onto Queensway, going towards the big roundabout.

Get yourself to the other side of the roundabout so that you are crossing the river bridge, taking the first right on the other side; Rodney Road.