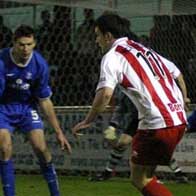 With his prolific record in front of goal at Basingstoke Town, the signing of Craig McAllister seemed like good business by boss Graham Westley. The striker arrived in 2004 with high hopes that we’d bring that potential to the fore. But his first team chances were few and far between here; McAllister spending time on loan at former club Eastleigh, before moving to Gravesend and Northfleet. Just one goal in 10 outings (seven from the bench) feels like a missed opportunity for both the player and the club.

In 2007, McAllister signed for Woking and has also been seen at Crawley and Newport. In more recent times, McAllister returned to non-league circles to continues his career. Three years at Eastleigh was by far the most successful spell; scoring goals aplenty in more than 100 appearances. It was enough to convince Sutton United to come in for him in 2015. His two years there, however, were punctuated with a loan spell at Eastbourne Borough.

After his time at Sutton, McAllister went back to Eastleigh – but it wasn’t the same success he saw before. He moved onto Gosport Borough in 2018.