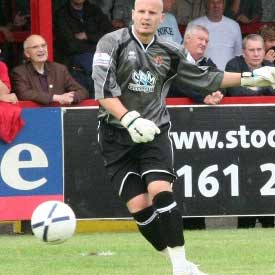 Mark Stimson‘s second signing after taking charge of Stevenage Borough, Danny Potter was a decent stopper who arrived from Canvey Island in 2006. First and foremost, it was to fill the void left by Shane Gore. But it’d also play a key part in shaping Stimmo’s squad going forward. But Potter had his work cut out after moving back back into the Nationwide Conference, following Canvey’s demotion to Ryman North.

With Alan Julian so impressive for us, however, Potter found it hard to get a decent run in the side. There were no doubts over his abilities, but Julian proved himself number one on more than one occasion. With first-team chances at a premium, Potter left the club in summer 2007; moving slightly north and joining rivals Cambridge United.

First on Chelsea’s books, Potter moved to Canvey Island in 2002; featuring more than 70 times for the Essex club – including the season Canvey won the Ryman Premier League title. There are also spells at Weymouth and Exeter City on his rap sheet prior to his time with us.