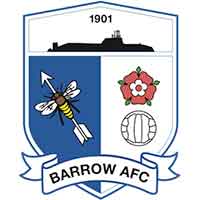 Our last game (to date) as a non-league team came against Barrow – and they stopped us doing a Conference-FA Trophy double. We’d kept clean sheets in both our 2009-10 Blue Square Premier meetings. But Trophy final day? Well, we’re not entirely happy with the eventual result. The records simply say we lost 2-1 after extra time at Wembley. It was also the first time we’d ever lost at the ‘new’ home of English football.

Our record against the Cumbrian team, otherwise, is still pretty decent as we write this; that Wembley defeat one of only two wins in seven for ’em (compared to our four). That’ll be at stake with the Bluebirds getting back to the Football League in 2020; the first time since being voted out in favour of Hereford United back in 1972. And, with Boro’ opening the 2020-1 campaign at Holker Street, we wouldn’t be waiting all that long to see what impact such a long gap had on our head-to-head.

For the Bluebirds, however, the main aim in their first League season in nearly 50 years is surely to keep their new-found status. Anything else will be a bonus. But, as we showed in 2010-1, anything is possible for ‘Barrowcelona‘…

You may wish to confirm the details before making the journey to Holker Street. As we understand, there are parking facilities available for supporters with a disability or an impairment. These can be booked in advance – call the club to do so: 01229 666010.

Fans who receive either the middle/higher rate of the Disability Living Allowance or the advanced-rate PIP will pay the relevant ticket price – but their personal assistant will be admitted free of charge.

In the Holker Street End, there are also five spaces for wheelchair users.

The Crossbar is the club’s own gaff at Holker Street, which you can get to from Wilkie Road. Away fans are said to be welcome. A little further afield past Asda, and then left onto Duke Street, is The Ambrose Hotel. You can venture into the town if you prefer.

Right then, are you prepared? Got the car full of petrol and a will to drive for hours? You’re gonna need it. Imagine going to Morecambe – but tack 40-odd miles on top. To start, take the northbound M1 and M6. Continue north on the M6 past Birmingham, past Stoke, past the M62 and past Wigan.

At Junction 36, leave the motorway and take the A590; the first exit on the roundabout. If you’re brave, you can try to shave off the corner by taking the A6 around Morecambe Bay. But this is an easier method.

Stay on the A590. It involves what appears to be leaving the dual carriageway and taking the first exit on the roundabout after about four miles. If you continue straight along the dual carriageway off the M6, you’ll end up on the A591 – so be alert. Stay on the Barrow-bound A590 for about 25 miles through the picturesque Lake District. You’ll be coming into Barrow-in-Furness from the north.

Shortly after entering Barrow, there’ll be a left turn for Wilkie Street where you’ll find the top end of the ground.

You can park at the ground behind the Popular side stand. From the motorway, continue on Wilkie Road as above until you reach traffic lights. Turn right and then you’ll find the car park on the right just before the roundabout. It’ll cost you £2.

You’ll have to be up early for this one; the rail trip to Barrow can be around four-and-a-half hours long, according to National Rail. Once you get to the station, it isn’t much of a trek to the ground. Leave the station via the car park, and turn right up Holker Street. The ground is a matter of yards up the road on the left.