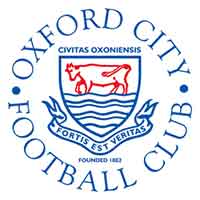 One team that didn’t manage to beat us during our ill-fated 1987-8 Vauxhall Opel League Division One campaign was Oxford City. It’s a small win for us as far as that season goes. A long-time member of the Isthmian League, the Hoops moved around a bit since the turn of the century; turning out in the Southern and Spartan South Midlands Leagues. Oh, and Conference North and South. They’re a ‘Southern’ team. For now…

The easiest way to do this without going via Aylesbury is to take the A1(M) south and M25 counter-clockwise. Then, take the M40 north for about 28.5 miles. Exit for the A40 towards Oxford. Head into Oxford and take the second exit at Headington Roundabout. Leave the A40 at the exit for Marston and Elsfield, turning left onto Marsh Lane.

The ground will soon be on the left.

There are two car parks at the ground that can be used by all fans. The main one of these is outside the Community Arena. To use it, turn left as soon as you enter the site and keep on the road until you get to the car park.

If it’s full, park in the car park at the entrance to the site.

More car parking details will be announced on social media if the game demands further capacity.

It’s some distance from the station to the ground, so it’s probably a good idea to grab a taxi or something.