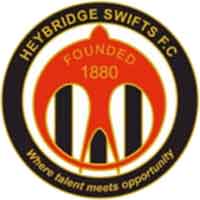 Heybridge Swifts were regular league opponents for us during the mid-1980s. And into the early 1990s on top of that too. Like us, Heybridge Swifts were new arrivals in Servowarm League Division Two North for the 1984-5 season. And, like us, the Swifts clocked up 75 points in that campaign; edging us on goal difference to finish third. In 1985-6, the Swifts finished third again. But we won the title and went up. It’s a form of bragging rights, yeah?

Leave the clockwise M25 carriageway at Junction 28 for the A12 and head towards Chelmsford. After 15 miles, leave the A12 and take the third option at the roundabout for Maldon Road (A414). Remain on the A414 to Heybridge.

After crossing a river and a McDonald’s, take the first exit at the roundabout for the B1018 (The Causeway). Then take the second exit for the B1022 and go past an Asda, before following the road around onto Scraley Road.

We’d be surprised if you didn’t find an available space at the ground itself.

Not unlike a fair few other locations, a railway station appears to be lacking in Heybridge.