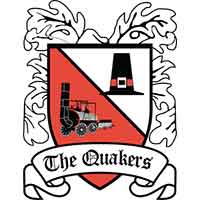 If we hoped Darlington were ripe for a cupset in our 2002-3 FA Cup Round Two clash, we were quickly and easily proved wrong. The Quakers cast us aside in a 4-1 win to earn the spot in Round Three we so desperately wanted. It makes it worse to learn that we’d have played Farnborough Town in the next round; the winner taking on Arsenal. But we’re now getting into a whole other story.

In late 2003, the club went into administration and spent most of the next few years with a financial question mark hanging over them. Being relegated to the Conference in 2010 as we came up to the Football League didn’t help. Two seasons later, the Quakers ended up in the relegation spots again; destined for Conference North. The club were taken over in summer 2012 but failed a CVA – so were expelled from the FA and wound up.

A “new” club now plays in their place; continuing the path back to where they left off. As of summer 2020, the Quakers had made it back as far as National League North.