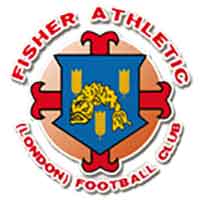 Last seen in Conference South, Fisher Athletic were wound up in the High Court due to unpaid income tax back in February 2009. Our only cause to meet them came in the FA Cup during the 1992-3 season; Boro’ travelling to south east London and winning 7-1. A new club (Fisher FC) formed to take the place of the original Fish; playing in the Southern Counties East League Premier Division as of the 2019-20 campaign.