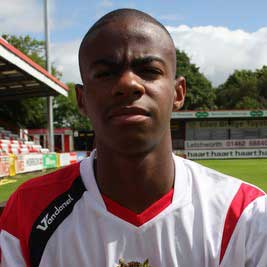 Jerome Anderson signed for Stevenage Borough in summer 2007 after a series of impressive pre-season displays leading the line in attack. Anderson graduated through Oxford United‘s youth system and signed a two-year deal at Broadhall Way. After a few first team outings during the 2007-8 season, the striker was retained for 2008-9. With so many strikers at Broadhall Way, however, he found first-team chances again hard to come by.