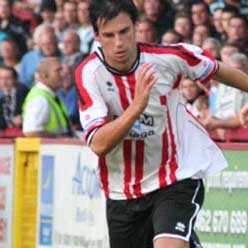 The 2005-6 season saw George Boyd go from a promising youngster on the first team fringes to one of the hottest talents in non-league football. Boyd was one of our most used players over the course of the season; his form attracting the gaze of many League clubs. Of course, that interest was firmly rebuked by Phil Wallace as Boro’ battled to hold onto a star player that was capable of some utter magic.

With more than 100 starts in a Boro’ shirt, it was during the 2006-7 season that Boydie went past his century; capping a remarkable ascent to fame since breaking through from the EFCO youth development scheme. That 2006-7 season promised to be an even better one for the player. And so it came to be, with, Peterborough United – then in League Two – more than happy to fork out Conference record £260,000 for him.

In the years that were to follow, Boydie’s upward path took him into the Premier League. It felt as if destiny had finally taken over, to quote a former boss of his. You know the one. As one of his terrace songs went, “the manager who is eccentric”. Hull, Burnley and Sheffield Wednesday were all wowed by his talents too. And, in 2019, it was back to Posh. Could it be a career that goes full circle and bring him back to Boro’? It might be wishful thinking.

And despite being an England C international previously, ancestry led to Boyd’s first senior call-up for the Scotland national team in 2009.