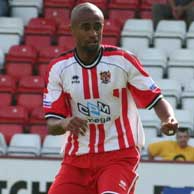 After falling out of favour at Exeter City during the 2005-6 season, Brazilian defender Santos Gaia joined us as part of Mark Stimson‘s rebuilding efforts. Gaia was capable of playing at either left-back or left centre-back; becoming an integral part of the team that won the 2007 FA Trophy. Loved by the fans for his full commitment, Gaia again fell out of favour, however; the arrival of Mark Arber leaving no room for the Brazilian. It wasn’t long after that he made the switch to Grays Athletic.