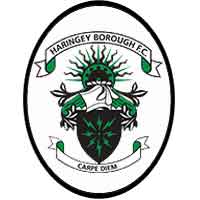 One Boro’ to another – Haringey Borough are a team we’ve not faced competitively since the mid-80s, however. It’s a shame too. Our record against them (so far) is flawless; four wins from four and just one goal conceded. But that came in a 4-1 win in November ’85 – so we think we can let it slide. After dropping out the Isthmian League in 1988, this Boro’ ended up in the Spartan League; latterly the Spartan South Midlands League.

Either head south on the A1(M) and take the clockwise M25, or use the A602 to join the southbound A10 at Ware; from Enfield, you’ll be requiring the A10 into north London.

Six miles after the M25 roundabout, turn right onto White Hart Lane (yes, yes…) and the ground is down here on the left.

There is a car park at the ground that should cater without an issue.

The walk from White Hart Lane station isn’t the shortest, but it is fairly simple. Come out of the station and turn left onto White Hart Lane, which will become Creighton Road for a bit. Cross the A10 and keep on White Hart Lane until the ground appears on the left.