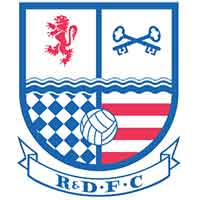 For Rushden & Diamonds, life was a rollercoaster; from formation to the Football League in just nine years and then down and out of existence in quick time too. The club was the result of a merger between Rushden Town and Irthlingborough Diamonds; both of whom were our opponents in previous years. The merger was the brainchild of business tycoon Max Griggs, who financed the rapid rise of the Diamonds between 1992 and 1996.

After pushing higher at the top end of the Conference, promotion to the Football League was theirs – though not before we’d had a laugh at their apparent struggle to do the job. By 2003, the Diamonds were at their peak; Division Three champions and heading into the third tier (or League One as it now is). But the rise couldn’t last. The bubble began to burst. And the club came tumbling back down.

The Diamonds lasted one season in the third tier. They were seen as promotion hopefuls the next season; the prospect of an immediate return. But they ended up finishing 22nd in the 2004-5 season. That summer, Griggs handed control of the club to a fans’ trust. On the pitch, however, things got worse and the club fell back into non-league ranks in 2006.

Off the back of returning to non-league football, attendances fell and money worries rose. It seemed stable enough until the 2010-1 season; a campaign where the Diamonds went through tragedy, drama and boardroom movements. The Football Conference kicked ’em out in summer 2011 as the club didn’t have the cash to complete the new season. A last-gasp bid to join the Southern League also fell through.

Administration and closure followed, as did the formation of a new club now looking to get back up. And the Nene Park stadium that was so impressive in the Conference? Left with no purpose, the demolition crews took care of it. A metaphor for the Diamonds’ journey.