Tied Up In Notts…

Tied Up In Notts…

From last week to this, it’s one relegation straggler to another for Boro’. And it’s a bit of a downgrade too; our guests propping up the League Two table and that. In some ways, we did ’em a favour last week by holding the Silkmen of Macclesfield to a score draw. But we didn’t exactly do ourselves a favour by letting in another goal in stoppage time. Yet. Again. Two points lost. Not one point gained.

This match brings up our 40th of the campaign, so the final straight is coming bang into view. And “anything is possible“, says the gaffer. But, for us, those playoffs aren’t. So, let’s put that idea to bed. We need to get eight points more than the four teams above us from the 24 left on offer now. There’s more chance of Notts County staying up, and it’s not a pipe dream. It’s closing up down there.

We reckon it’s been way too long since we got the better of the Magpies. More than two years now, in fact. As this could well be the last time we face ’em for at least a year, it’d be nice to sign off with three points and pull ourselves level on the head-to-head front. Three times we let ’em lead the reverse game earlier this term. And three times we got back on terms. Do we really need to live life so dangerously this time? No. Didn’t think so…

The last time we saw Andy Haines was the first day of this year we like to call “2019”. And things turned OK on that occasion, so do we have much to fret about. In fact, it seems like a fair while since we had a ref with whom we tend to come away with something. It’s an enormous coinkydink, before Notts fans get all hot and sweaty. But our only defeat on Mr Haines’ watch is now nearly 12 years ago when Stimmo ruled the roost at the Lamex.

Notts County are bottom of the table, and that ought to be enough. But you’re demanding folk. So, we’ll dig a little deeper and feed your need for the knowledge. To be fair to ’em and fair we’re contractually obliged to be, they’re now only three points behind Yeovil in 22nd and have taken more points from the last eight than us. Well, one more point. And their recent record is inconsistent. We’ve at least not lost any of the last three.

It’s no shock that a side with the worst defensive record in the division is propping up the table, despite Yeovil being worse on home turf than Notts. And Crawley are worse on the road. That’s by the by. Away from home, County have let in at least one goal in each of their last 13 – but they’re not to be taken lightly. Their last away win was on 9 February at playoff-chasing Forest Green. It’s probably best that we don’t take them lightly, then.

There’ll no doubt be time added on at the end of the game too. And we all know what that seems to mean.

Back once again are the renegade masters of illustrating form, kickoff.co.uk… 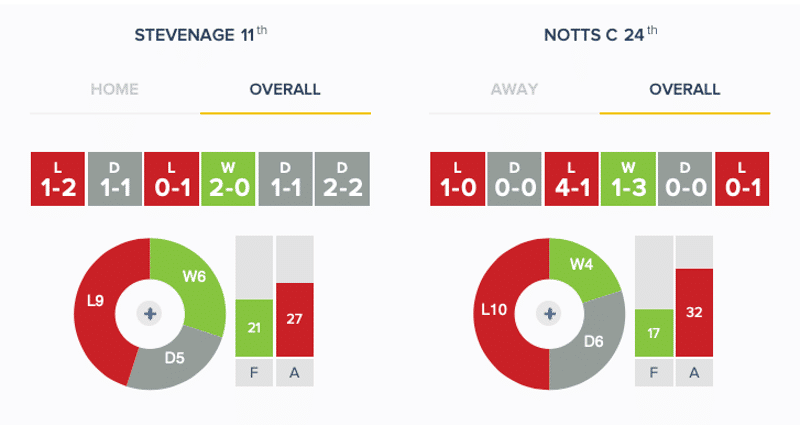