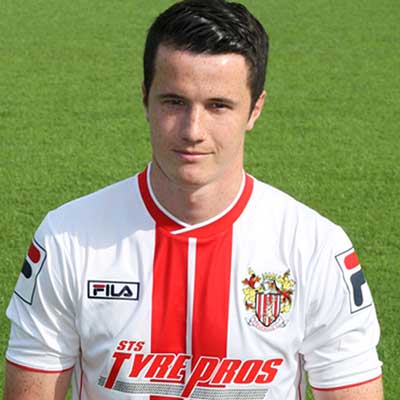 A summer signing in 2012, young midfielder Matt Ball came to the club after being signed by manager Gary Smith from Norwich City. We were looking at youth to take us forward after a strong first season in League One. And the signature of Ball can be said to have been very much in keeping with how we were approaching our future. Even if it didn’t seem all that clear to start with how best to use him.

Not only that, but we were keeping it in the family too; Matt’s father Tim Ball being one of our former players of note from the 1980s.

A Northern Ireland U19 international, Ball was unable to break into the Canaries first team during his solitary year as a professional at Carrow Road. He shone in the club’s academy side, and signed terms as it moved up the divisions. Once in the Premier League, the Canaries placed their faith in experience. There was a brief spell on loan at Macclesfield Town, but it doesn’t appear as if any first team action was forthcoming.