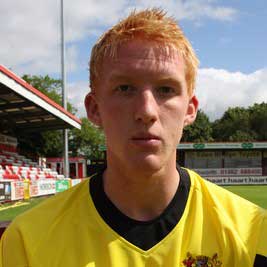 James Russell is the young goalkeeper snapped up from Chelsea; displaying some early promise in his few appearances for our first team. The return of Graham Westley in 2008, however, also saw Chris Day and Ashley Bayes come in. Both ended up bumping Russell down to third choice stopper. So, having spent time on loan at Canvey Island already, the quest for first team action took him to the Essex coast for good.