Tinfoil Cups At The Ready 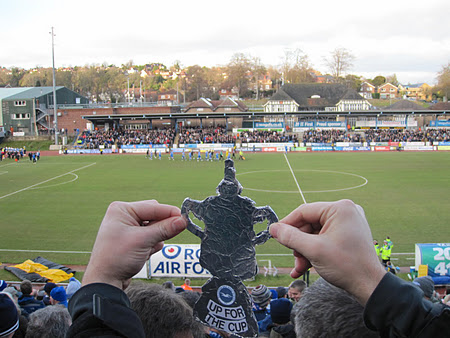 Is yours ready? The great FA Cup adventure is about to begin for another year and it is still a little novel to be starting in Round One, rather than the dear Fourth Qualifying Round. It is perhaps fair to say – and with no disrespect intended – that Rotherham United away isn’t the salivating encounter we would have once considered it to be. It’s a mere four years ago that we’d have taken this as an excellent chance to ruffle feathers. Now, it is us who may be the subject of a giantkilling tomorrow. How times do change in this funny footballing landscape.

To us, there are some elements concerning this tie that really unsettle us; not least the fact we’re crossing paths with Steve Evans once more! Rotherham have a new home and are in the push for promotion this season, while we’re coming off the back of a 4-0 drubbing last week. We questioned if we could bounce back from Colchester; the Swindon defeat certainly asks that once again.

What would you do if you were Smiffy? Make changes, or keep it the same (albeit without the suspended Gregorsz Tansey)? Patrick Agyemang, Lee Hills and Andy Iro all appear to be available – do you change the system? The personnel? Knowing Smiffy as we do (which isn’t that well), we suspect neither will change – last week’s troops will have the chance to make amends, and make amends they will!

FIFA13 Verdict:
Unfortunately, FIFA13 did not list this as a Live Fixture but we still did it. Our team sheet was much deliberated over, but in the end we went with the Team Tarot below. It is with a degree of regret that we have to admit the game didn’t exactly go to plan and we may well have lumbered Boro’ with an opportunity to get out the “Stevenage welcomes Rotherham United” bunting after this bore draw.

Despite controlling possession for most of the game, Boro’s shooting was either lacking or misdirected. Four shots in the first half all missed the target; we think one did actually hit the target in the second. And do we mention Steve Arnold’s 88th minute penalty save? Oh. We just did. But in real life context, a clean sheet and a draw is a step in the right direction. FT: Rotherham United 0-0 Stevenage.

Bookies’ Verdict:
It’s all fairly even at first look for this fixture. Either no money is going down or there is no way to determine the outcome of this one. BetVictor appear to offer the best odds on both the home and away victory at 7/4 and 17/10 respectively, while a draw is 119/50 at Betfair. Rotherham to sneak it 2-1 is 10s with Betfred, while Stevenage to run out 3-1 winners will get you 22s at Blue Square (Luton branch?).