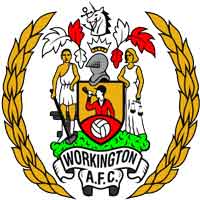 The 2010 FA Trophy Quarter Final draw paired us with Workington – and it was them who’d have to make the long journey down. The Reds gave us a pretty stern test too; Boro’ made to work hard to keep their hopes of a non-league double alive.

It’s not quite as far as Carlisle (we think!) but much further than Barrow. Workington has you “working” a fair bit if you opt to drive this one. It’s around five hours in the car – and that’s if the traffic is playing ball.

You’ll have to familiarise yourself with the A1/A1(M) because you’ll be travelling along the best part of 200 miles of it. You’re aiming for Catterick. Once you pass there, things begin to change.

At Scotch Corner, exit the A1 and take the second exit at the rather big roundabout for the A66 itself and settle back. It’s another 88 miles before you’ll need to do much more, but for the eight-or-so roundabouts to negotiate.

The A66 will take you into Workington, which is hugely helpful as it means effort is kept to a minimum. Once in the town, turn right onto the A596 Bridge Street and continue along this road; going over a roundabout along the way. If you’ve done it right, you’ll cross the Derwent and travel along its north side until you reach a roundabout. Take the third exit for the A597 Trinity Drive and this will also take you back over the Derwent.

We’re told there is some parking available at the ground, which is free. But if this does turn out to be the case, it might well be in demand. You’ll also find a Tesco nearby – but check to see if there are any regulations in place.

If you fancy an early rise and six hours on trains, then this is the journey for you. In fact, we think that you’ll need to be leaving Stevenage at around 7.30am to get to Workington in good time. And you’ll need the help of the gods to get back before midnight.

Workington’s station is only a 10-minute walk away, helpfully. You’ll need to head along Oxford Street, turn right onto Gordon Street and continue onto Duke Street. Turn right onto Church Street and then left into William Street. Continue in a relatively straight line for the stadium.