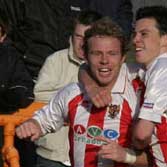 The demise of Hornchurch two months into the 2004-5 campaign did benefit Stevenage Borough in the shape of midfielder Simon Weatherstone. In fact, we’d been keen to sign him when moving from Yeovil Town to the Urchins. But it sadly took financial woes for us to eventually get our man; manager Graham Westley delighted to secure his services on a free transfer.

With much experience from his time at Yeovil, Boston United and Oxford United, he was brought into add a new dimension to our midfield as an attack-minded player. There was, however, the feeling that we didn’t see the best of him; Weatherstone’s form not the most electric during his stay at Broadhall Way. His return of a mere two goals was probably not what most had in mind when he first came to us.

Leaving at the end of the 2005-6 season came as no huge shock, but he continued to perform at the top end of the non-league tree. After us, he moved south to Weymouth and then onto Crawley Town. He also saw action at Eastbourne Borough, where he scored a penalty on the final day of the 2009-10 campaign to keep the club in the Blue Square Premier. After ending his playing days, Weatherstone made the move into coaching at Bournemouth.