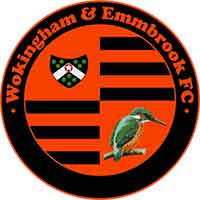 Now no longer existing as a club in its own right, Wokingham Town merged with Emmbrook Sports to create a new team in summer 2004. That’s how we’re treating it, at least. Whether you choose to do so is your own look out. If we should ever play the ‘new’ club, a separate profile shall be created.

Wokingham were our opponents during our 1992-3 and 1993-4 Diadora League Premier Division campaigns. It came towards the back end of their 14-year stay at that level; the club falling just short of promotion to the Conference in 1990 after coming second – three points behind champions (and neighbours) Slough Town.