Home » Stevenage » Stripes’ Revival – New Bid: Blast From The Past 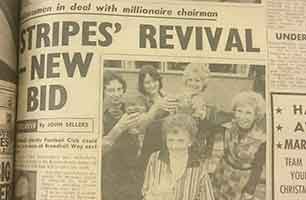 Not for the first time and (hopefully) not for the last, we’ve been trawling through the British Library archives. Our aim, obviously, is to join up yet more dots in Stevenage Football Club’s history. And what better excuse is there than Boro’s big four-zero? After ploughing through copies of The Comet that are older than our editorial team, here’s the first in a series of articles from Boro’s early days. The story here? “Stripes’ Revival – New Bid”.

First thing’s first, however. We’re not in the business of ripping off our local rags, their writers or their rightful property. All we want to do is share tales from the club’s journey that you might not otherwise get a chance to read up on. And, if you do read it, you could just find it to be a fascinating historical jaunt. If not, well, we’re not sure how you made it this far, to be honest. So, in the words of Black Eyed Peas, shall we begin? (Eh?, Ed.)

Stevenage Athletic Football Club could be back in business at Broadhall Way next season.

A group of local businessmen met millionaire chairman Javier Reveulta at his Bournemouth home on Tuesday night in an 11th hour bid to save the club.

And after several hours discussion, Mr Reveulta agreed to relinquish his hold on Athletic – providing certain conditions were met.

“I am not against a football club continuing in Stevenage – far from it,” he said.

“But I will not allow a club to continue at the expense of the local tradespeople to whom money is owed.”

His conditions are (1) that a sum of money be deposited with him in exchange for his shareholding. When the club shows that it is willing and able to start paying its debts, this money will be released to assist that aim.

(2) That agreement is reached with the club’s bank over the repayments on the existing overdraft.

(3) A creditors’ meeting is called and their agreement obtained to a settlement of outstanding debts over a period of time.

The club’s former manager, Bill Coldwell, who heads the takeover group, said afterwards that Mr Reveulta’s terms could be met.

“I think it would be deplorable if yet another club was allowed to exist in Stevenage with the sole intention of leaving creditors, particularly local tradesman, stranded yet again.

“We want Athletic to continue and pay its way,” he said.

• In the meantime, the newly-formed Stevenage Football Club intends to go ahead with a youth match at Broadhall Way on Saturday.

But Mr Reveulta issued a warning this week that he would go to any lengths to stop the game taking place.

Now, you’ll note that our first article from this “Boro’ At 40” series isn’t really about the club. We found it interesting, however, that some weren’t giving up on Stevenage Athletic – months after the axe fell. Of course, there is a little add-on to this article about the fledgling Boro’. It’s also interesting, we think, to read how Mr Reveulta “would go to any lengths” to stop Boro’ using the Broadhall Way pitch. Yes. Any.

As the next article in our series will show, joking he was not! Just a little spoiler there.

Our work at the British Library has also thrown up some results from pre-United Counties League days. We’ll make sure we get them onto the site as soon as we can. Well, once we work out how we fit them in. For the time being, the 1980-1 season remains our starting place. We’ll be back to the British Library soon enough to dig out much more of our 1976-1980 history. Meanwhile, we’re still aiming to fill in the missing gaps between 1980 and 1992. If you think you can help, check out our missing match data page. Until next time…