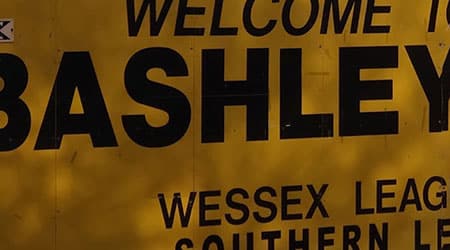 Boro’ have taken on their fair share of opponents down the years and some of those teams have simply been no more than passing acquaintances, while there are others that have become – well – annoyingly familiar. For all the many times we’ve faced teams like Woking, there have been rare match-ups too. So, we’re asking, where do Bashley stand in the grand scheme of things?

Bashley: Us And Them

Not for the first time since we started doing this, we’ve been handed a club that we’ve only met once. When you remember that this is just the third time since we started doing this, that’s nearly some feat. But it is what it is, and what it is needs no excuses: Bashley are this week’s ‘team in focus’ and a fleeting trip back to the hacienda days of the early 21st century is what we have.

Bashley – or the Bash to give them their actual, genuine, “no really” nickname – are even newer arrivals to national football than Boro’. Formed in the immediate and austere aftermath of the Second World War Two, it wasn’t until 1983 that the Bash decided the glamour of the Bournemouth League was all too much and traded it in for the much more becoming Hampshire League.

From that platform, the club rose into the Wessex League (1986) and won the title in all three years they were associated with it. And so the Southern League beckoned in 1989, with Bashley immediately romping to the Southern League title to join the ranks of the Premier. Yes, Southern League Southern Division sounds a little bit overkill. Them, Portsmouth A and Guernsey no doubt.

By the time they abandoned their delightful New Forest abode for the harsh, post-modernist surroundings of Stevenage in 2002, the Bash had dropped out of the Southern League’s top flight and back to what was now called the Eastern Division. And amid a thoroughly average mid-table campaign in 2001-2, the FA Trophy draw brought them to face Cloughie’s side at Broadhall Way.

To be fair to them, they gave it a good go too. Boro’ might not have been setting the Conference alight, but were fancied to gallop into the Fifth Round of the Trophy. Bashley’s spirited display was undone by a Kirk Jackson goal, so Boro’ did get their win – but it had been anything but straightforward in what ended up being a slender one-goal win.

For the Bash, it was back to securing 10th position in their division. For Boro’, it was a home tonking by Woking the next week – and despite sticking seven goals past Forest Green in the subsequent two games, Cloughie was given the elbow at the end of the month by Phil Wallace.

Proof you don’t always get a fairy tale ending? Maybe – although we suppose you might get something along those lines at Casinos with Jack and the Beanstalk Slots instead…

Since then, Bashley briefly flirted with the Isthmian (or Ryman) League but continue to plow on in the Southern League – again losing their Premier status in 2014 after a seven-season stint. Do you remember them much? Perhaps not, but they’ll forever be one of the teams Boro’ beat en route to our first ever FA Trophy Final and, without it, you might not ever have seen Villa Park.