Home » Football » Making History, Or Just Living In It?

Making History, Or Just Living In It?

Making History, Or Just Living In It? 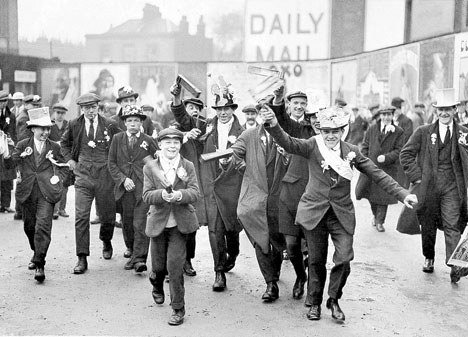 First, our congratulations to the institution that is the Football League. After 125 years of coordinating competitive league football, there are no signs of slowing down and we fully expect 150 years to be recorded without too much trouble. But the six anniversary games that greeted this landmark season spurred us into thinking – and trust us when we say we are not fans of thinking too much.

Let us remind you of those signature fixtures from Round 1 of the 2013/4 season: We had Burnley v Bolton and Derby v Blackburn kicking off the Championship; Preston v Wolves and Sheffield United v Notts County getting League One underway; and finally Newport v Accrington and Rochdale v Hartlepool to usher in the League Two campaign. So why were these teams selected for this momentous occasion?

Burnley and Bolton were two of the League’s 12 founder clubs and Turf Moor is one of the few grounds remaining to host the League in its first year. Five others – Derby, Blackburn, Wolves, Preston and Notts County – were also founder members in 1888 (and a noticeably Northern competition it was at that time too). Hartlepool and Rochdale, meanwhile, is the most played fixture in the League’s history.

Newport v Accrington, on the other hand, has more tenuous reasoning as they are the new incarnation of clubs that, while listed in Football League records, went under in years past. (Though Newport are the newest inductee into the League’s ranks after their promotion).

But amid this joyous celebration of the long-running entity that is the Football League, we feel that it doesn’t completely reflect what the competition is today. Of course we are going to be biased in our outlook, but the League is as much about its historic clubs as it is about your Stevenages, your Crawleys, your Yeovils and your Morecambes; y’know, the new boys from the non-league finishing school.

Perhaps it feels less so today with the dilution of former League stalwarts in the Whatever The Hell Premier it is these days, but for so long the Football League was considered to be the Promised Land for clubs like Boro’. It is all we aspired to – especially for the long years between 1996 and 2009 after we were turned away for not having our ground ready weeks and months before we knew if we needed it to be.

But we should have been grateful for promotion and relegation! Our 1996 Conference title win came just 10 years after the League banished its archaic election process, which saw a raft of non-league clubs miss out on promotion. Between the formation of Division Four in 1958 and the end of election/re-election in 1986, just five clubs were voted out – Southport the last, losing their League spot to Wigan Athletic in 1978.

On the other side of the fence, Hartlepool United were re-elected 11 times during that time – an intriguing new outlook on the Hartlepool/Rochdale fixture record, don’t you think? In the interests of balance, Rochdale were re-elected six times. Mind you, the record of teams promoted by right after 1986 isn’t a complete success – only Colchester and Wycombe have stayed in the League out of those promoted pre-1996.

It isn’t even until 2002 that you can start to see the upward curve of teams coming up from the Conference into the League. It has, no doubt, a lot to do with the era of professionalism but since the 2002/3 campaign, 16 out of the 20 teams promoted from the Conference will play League football this season (not including last year’s promotees – they’d have to be so very special to be relegated without kicking a ball).

And we think in eight of those cases (Yeovil, Doncaster, Shrewsbury, Carlisle, Dagenham & Redbridge, Exeter City, Stevenage, Crawley Town), the ladder has been climbed yet further into the third tier. Yes, some of these teams were ex-League when they came down into the Conference, but they still had to climb back up. So where are the celebrations for the teams defining the new age of the Football League?

It’s all very well celebrating the clubs that were handed a Football League place all those years ago, but some of us had to work for what we have today That got us thinking, that’s what we had to say…